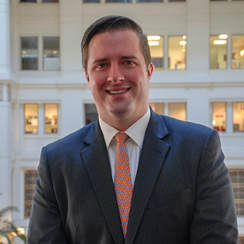 Kenny Hodge currently serves as the Senior Director of Government Affairs for Kimbell & Associates. In this role he works with the government affairs team to develop client-specific strategies and then executes them on Capitol Hill.

Kenny first worked at Kimbell & Associates from June of 2010 to March of 2017, where he developed expertise on budgetary issues, FDA’s user fee programs, in vitro diagnostics, health information technology, and patent reform. In 2017 and 2018, Kenny joined two other Kimbell & Associates alums to work for a retail advertising startup in Grand Rapids, Michigan. Kenny served as the Vice President of Client Development for the company, developing sales and growth strategies that pushed the company out of the startup stage and into the growth stage. During his tenure, the company qualified for the Inc. 5000 list of the country's fastest growing companies.

Since rejoining the firm in 2019, Kenny has taken a lead role with the firm’s Appropriations Committee strategies; and he is proud to serve as the Director of Government Affairs for the Institute for Gene Therapies (IGT), an advocacy organization launched in 2020 to help address access challenges surrounding the development and adoption of gene therapy products.

Kenny has volunteered time working for over a half-dozen Republican Senate and Congressional campaigns during his time in Washington; assisting in data collection, data analysis, policy research, and other field activities. Kenny has also been utilized as a public speaker for various events, including courses at Columbia University’s School of Public Health.

Kenny was raised in Louisville, Kentucky and graduated from the University of Kentucky with a BS in Biology, where he was a member of the varsity men’s tennis team. In his spare time, Kenny can be seen in the surrounding states with his dog, a fly fishing rod, or a set of downhill skis. On occasion, he'll still pick up a racket and hit the courts.
Back to Team Page