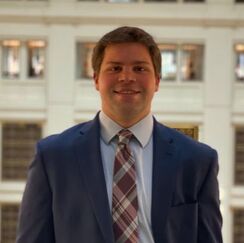 Jack Boyd, Government Affairs Associate, joined Kimbell & Associates in March of 2021. Prior to joining Kimbell & Associates, Jack served as an Advisor in the Office of the Assistant Secretary for Legislation at the U.S. Department of Health and Human Services (HHS). At HHS, Jack’s duties included supporting the work of the Congressional Oversight & Investigations team, coordinating responses to letters from Congress, and preparing HHS principals for Congressional hearings and briefings.

Jack has assisted with Congressional investigations on numerous topics related to the operations and policies of HHS and its various operating divisions, including investigations related to the federal response to the COVID-19 pandemic.
​
Jack graduated from Indiana University’s Kelley School of Business in 2019 with a double major in Business Economics and Public Policy Analysis. Jack has participated in three political campaigns and has completed two Congressional internships. Jack is originally from Lake Forest, Illinois. He enjoys spending time outdoors and is a fan of the Chicago Bears.
Back to Team Page