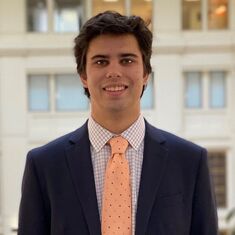 Evan Allison, Government Affairs Associate, joined Kimbell and Associates in August 2019. Evan is a former intern at Kimbell and Associates and the Department of Homeland Security Privacy Office. In Evan’s role, he assists the government affairs team with day to day tasks relating to client services, administrative duties, memo writing, Hill outreach, and research and analysis.

During his undergraduate studies, Evan served as a policy intern for the Department of Homeland Security Privacy Office. During his internship, he assisted the office with policy writing, database analysis, and FOIA compliance.

Evan graduated from the University of Kentucky in 2019 with a bachelor's degree in Political Science with an emphasis in Writing, Rhetoric, and Digital Studies. Evan developed a love for writing during his days at the University of Kentucky, where he studied various writing styles. He combined his love of writing with his passion for policy through a tailored political science program focusing on policy analysis.

Evan was born in Oklahoma City, Oklahoma, and raised in Naperville, Illinois. At an early age, Evan aspired to live and work in Washington, DC and follow in his father's footsteps. In his free time, Evan is an avid home cook who enjoys preparing dishes from around the world.
Back to Team Page