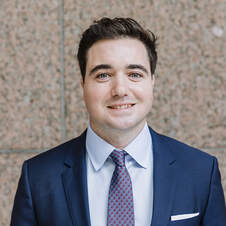 David Rudloff has served as a Research Associate on the Government Affairs team at Kimbell & Associates since the fall of 2017. Prior to joining Kimbell & Associates, David worked as a litigation paralegal at Covington & Burling. At Covington, David assisted in a variety of practice groups including patent litigation, product liabilities, and white collar investigations.

David graduated from Davidson College in 2016 with a bachelor’s degree in Political Science. During his time as an undergraduate, David spent a semester in South Africa studying political and economic history at the University of Cape Town. David was born and raised in Natick, MA and is an ardent supporter of the Patriots dynasty.
Back to Team Page