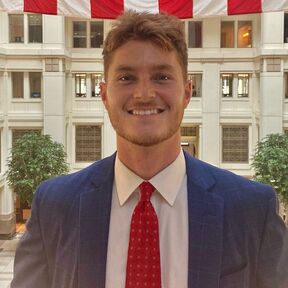 Austin Landrum, Fall Associate, joined Kimbell and Associates in September 2021. Previously. Mr. Landrum interned for 1stdegree Marketing & Public Relations as a business development representative. He worked with senior leadership to launch a new product PSAdirect to secure new national clients including Save the Children and The Salvation Army.

Mr. Landrum recently graduated from the University of Mississippi with a Bachelor of Business Administration. He has volunteered all over the college community with partners such as Oxford Food Pantry and JumpStart peer leader. Mr. Landrum was involved in Ole Miss Business Club, Ole Miss Men’s Volleyball Club, as well as being the president of the Ole Miss Wakeboarding Club. Mr. Landrum is considering attending Law School or Graduate School in the upcoming year. This fall, he chose to broaden his experience and knowledge by working in Washington, DC.

Mr. Landrum was born and raised in the state of Virginia. He is a sports enthusiast and expert outdoorsman. In his free time, you can find Mr. Landrum at the golf course, shooting on average in the high seventies.
Back to Team Page